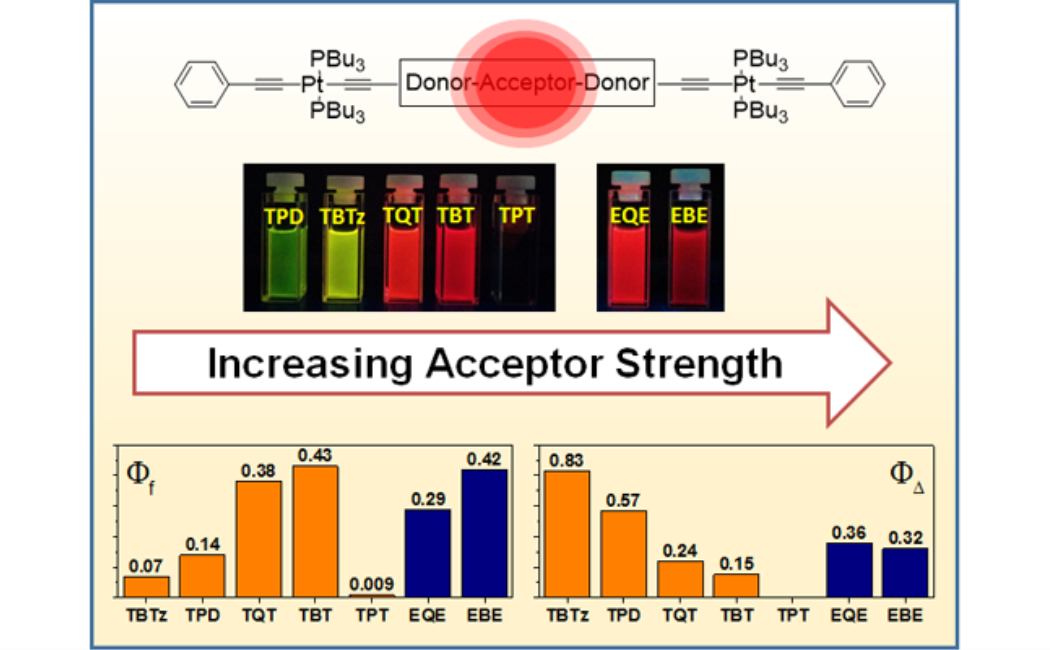 A vast array of research pertaining to p-conjugated polymers and oligomers has been motivated by their efficient light harvesting, structural versatility, and intrinsic charge transport behavior. In addition, there has been recent specific interest in dipyrido-pyrazine (DPP)-based donor-acceptor-donor oligomers in organic photovoltaic applications due to the excellent light harvesting properties of this chromophore. Here, we have an especial interest in the effect of the incorporation of heavy metals into p-conjugated chromophores for the exploration of the triplet state and its impact on solar cells, and as such are exploring metallated DPP derivatives. We found that both the metallic center in the DPP-Pt(acac) oligomer and the positive charge on the porphyrin are required to switch on the CT reaction. In this regime, the CT has been found to be much faster than the intersystem crossing (Figure 1, right panel). In addition, turning the CT on/off can also be achieved by replacing DPP-Pt(acac) with a structurally-similar organic oligomer with no metal centers regardless of the structure of the porphyrins. We have also conducted photo-physics experiments on a series of variable band-gap donor-acceptor-donor (DAD) chromophores capped with platinum (II). Careful study of the excited state dynamics, including triplet yields, reveals that the underlying origin of the unusual trend in the fluorescence parameters is that the singlet-triplet intersystem crossing rate and yield decrease with decreasing optical gap (Figure 1, left panel). We also found that the rate of intersystem crossing decreases as the LUMO is increasingly localized on the acceptor unit in the DAD.