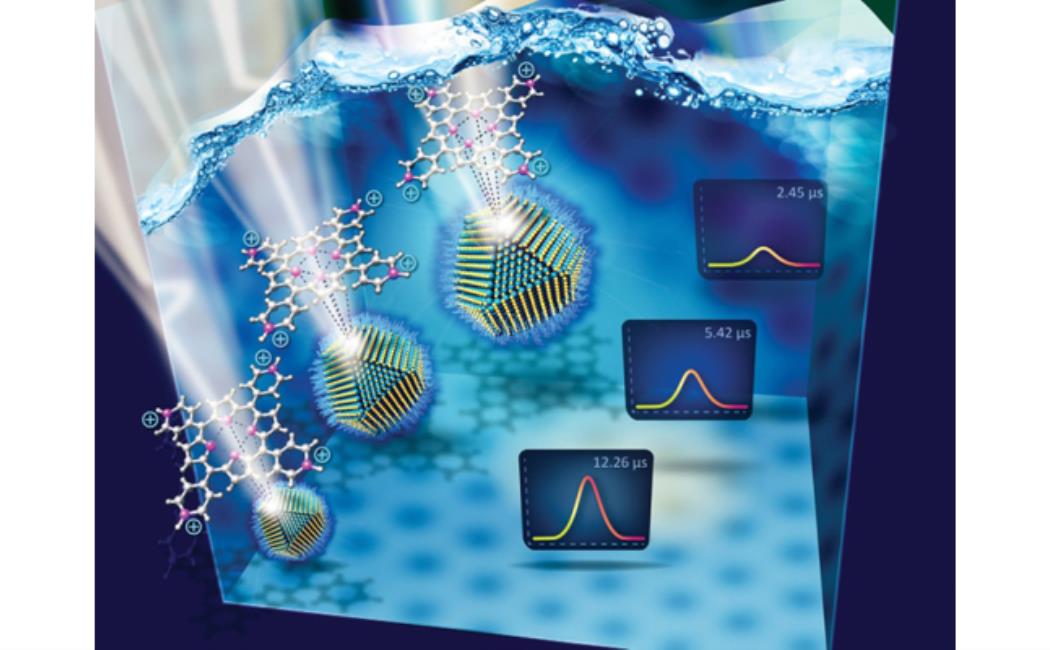 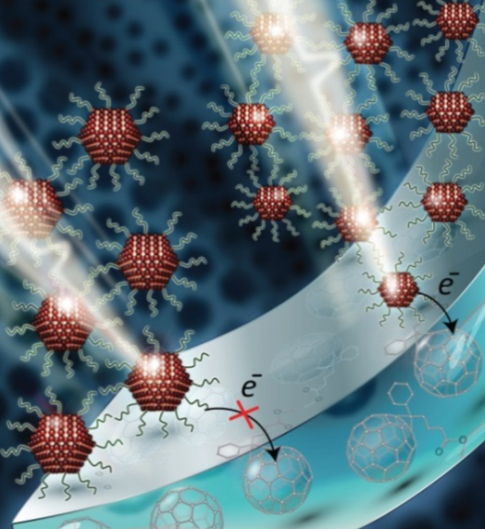 ​Figure 1: An efficient extraction of charges from the smaller quantum dots to the organic molecules, showing the impact of the quantum confinement on the interfacial charge transfer.

We studied the quantum confinement-tunable ultrafast charge transfer at the PbS quantum dot and phenyl-C61-butyric acid methyl ester (PCBM) interface as a model system. In this work, we added a piece to the puzzle with a careful investigation into how light affects electrons at the space between PbS QDs and PCBM electron accepting components commonly used in solar cells (see Figure 1). We found that the quantum-dot size distribution is critical for interfacial charge transfer and for the performance of QD-based solar cell devices. With careful size control, one can tune PbS QDs to inject charge carriers into the surrounding material at an ultrafast speed, not at all, and every speed in between. Our transient absorption data indicate that electron injection from photoexcited PbS QDs to PCBM occurs within our temporal resolution of 120 fs for QDs with bandgaps that achieve type-II alignment, while virtually all signals observed in smaller bandgap QD samples result from large bandgap outliers in the size distribution. Taken together, our results clearly demonstrate that charge transfer rates at QD interfaces can be tuned by several orders of magnitude by engineering the QD size distribution. In addition, we found that the charge transfer (CT) from the large size of QDs (with band gap lower than 1 eV) to the most commonly used electron acceptor is very inefficient if any. Thus, an alternative acceptor is urgently needed to harvest the light from large-sized QDs. Here, we utilize a cationic porphyrin as a new acceptor unit with unique features that bring the donor-acceptor units into close molecular proximity, allowing ultrafast CT for QDs of all sizes, as inferred from the drastic photoluminescence quenching and formation of the porphyrin anion radical (see Figure 2). Our results demonstrate the possibility of modulating the CT between PbS QDs and porphyrin not only by quantum confinement but also by the electrostatic interaction between the positively charged porphyrin and the negatively charged QDs. This approach not only provides a new pathway for engineering QD-based solar cells that make the best use of the solar spectrum, but also will advance both the design and understanding of QD interfaces for energy conversion. 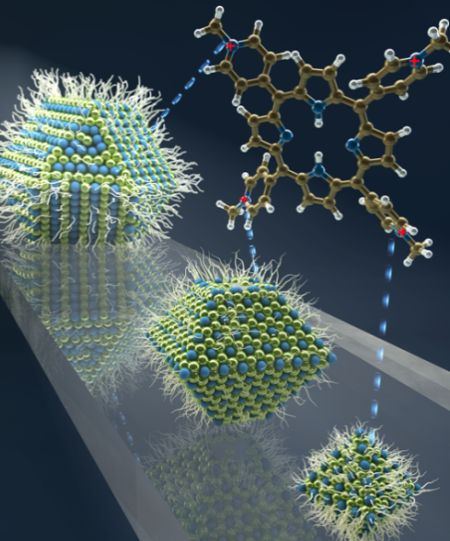 ​Figure 2: Using the interfacial electrostatic interaction between the positively charged porphyrin and the negatively charged QDs that bring the donor-acceptor components into close molecular proximity, allowing ultrafast and efficient electron transfer for QDs of all sizes.

In addition, we have reported the first experimental observations of controlled on/off ultrafast electron injection using cationic porphyrin-CdTe QD nanoassemblies as a unique model system (see Figure 3). Our results clearly demonstrate the possibility of modulating the electron transfer (ET) process at the porphyrin-CdTe QD interface. It can be tuned from zero to very efficient and ultrafast by controlling the charge localization of the porphyrin macrocycle, the number of positively charged meso units and the magnitude of the electrostatic interaction between the positively charged meso units and the carboxylic groups of the ligand coating on the quantum dot. In other words, we can now tune the reaction from a pure intersystem crossing (ET off) to a pure ET process by controlling the structure of the meso unit as summarized in these equations:

The novel insights reported here provide an understanding of the key variables involved in the nanoassembly, thus paving the way toward the exploitation of efficient ET at donor-acceptor interfaces, which is a key element and urgently required for optimal device performance. 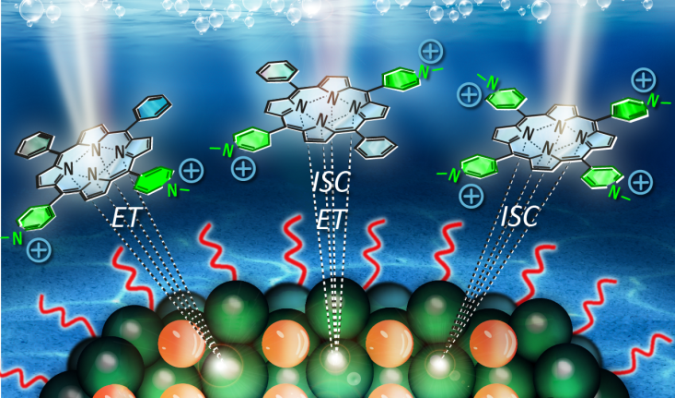 Figure 3: The different interaction mechanisms at the interface of porphyrin-CdTe QD assemblies, as tailored by the number and position of positively charged meso substituents.​ 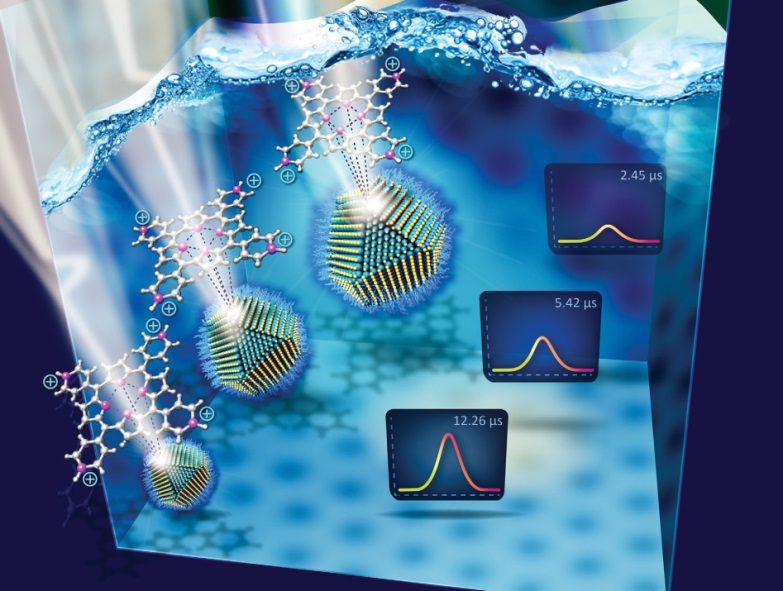 Figure 4: The impact of the quantum confinement on the lifetime of triplet state of porphyrin. It can be tuned from 2.4 to 12.2 us when we change the size of CdTe QDs from 6 to 1.2 nm.

Very recently, we have discovered a type of “internal heavy atom effect” to tune the photophysics at CdTe QDs interface. We can now tune the intersystem crossing (ISC) and the triplet state lifetime of cationic porphyrin by an order of magnitude by coupling it to semiconductor quantum dots of different sizes which could be of practical use for light harvesting. In summary, the time-resolved results demonstrate, for the first time, the possibility of modulating the ISC rate and the triplet state lifetime of TMPyP by controlling both the distance and the strength of binding between the porphyrin cavity and the surface of CdTe QDs (See Figure 4). Fluorescence quenching of TMPyP upon the addition CdTe QDs is observed and found to be sensitive to the size of the QDs, demonstrating the impact of quantum confinement on the observed quenching. Notably, the novel insights reported in this manuscript provide an understanding of the key variables involved in the nano-assembly, thus paving the way toward the exploitation of efficient ISC and subsequently elongating the triplet-state lifetime, which are required for light harvesting in the triplet state as one of potential solutions to overcome the poor exciton mobility to achieve high power-conversion efficiency.